Johnny Depp is known to be somewhat of a eccentric personality but there is nothing in his hands which shows him up to be one. Depp's hand simply shows that he is talented and creative. Sure, there are aspects of his personality (as revealed by his hand) that are not perfectly balanced, but then very few people are truly balanced.

Reasons for his phenomenal success
There are several signs on Johnny Depp’s hands which tell us why he became so successful. The lines on his palm are not clear from photographs, but it was possible to see that his headline is
fine and long, he has slim upper phalanges, and his hand is of the practical type with a broad palm, finely textured, and shortish fingers with slim and long first phalanges but thick third phalanges. The fingers are mostly straight and the thumb is quite long and low-set. All these signs show not just his intelligence but also common sense and pragmatism, as well as a broad, unselfish perspective on life and a desire for excellence. 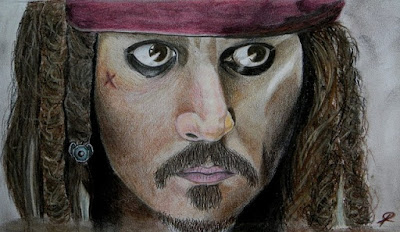 The Moon mount on his hand is well-developed as is the Venus mount.
Depp has a strong creative and imaginative side but if he managed to create magic because of his talent, it is probably because he has amazing willpower and determination.
Although is likely to be something of a loner, his hand shows that he is at heart a very loving and sympathetic man. He very possibly has a magnetic personality and this is a great asset to any actor. He very likely has a musical bent of mind as well.
Check out his hand photograph here and here. (The photo above is a free photo from Pixabay.)

In addition, he can be wilful and strong-headed. This means that he can become quite difficult, although he is not an egoistic man. Even if Depp has a deep sense of sympathy for others, he may not always have the ability to bond with them. Maybe it is the melancholic and brooding aspect of his personality which creates the issue.

Perfection and excellence are something that he seeks, even in himself.

There have been reports of drug abuse in his earlier years as well as his attempts to hurt himself. Unfortunately, without a clear look at the lines on his hand, it is difficult to pinpoint the reason for his behaviour but one can guess it is to do with his imagination, his intrinsic loner mentality and morbid thinking. The fact that it all comes in a sophisticated package and is controlled by a strong mind and will is quite intriguing.

He has a strong materialistic side, likes to enjoy the comforts of life and status symbols matter to Depp. However, his unselfish disposition and philanthropic nature more than compensate for this.

Related Reading: Tom Cruise's hand reading or Ben Affleck's Hand Reading or Hugh Jackman's hand reading or read about Mel Gibson and Russel Crowe or Denzel Washington and Julia Roberts or Tom Hardy.
Or find out about other Hollywood personalities, both men and women.